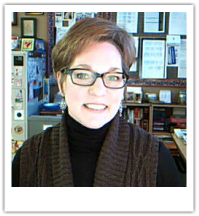 Greetings from beautiful rural Alaska! My name is Tammy Van Wyhe, and I currently serve as Superintendent of the Copper River School District. Of my 20 years in education in Alaska, 17 have been in Copper River, where I have served as English/theater/art teacher at Kenny Lake School (best job on the planet!), then as assistant principal and principal on the Glennallen School campus, followed by a move to District Office and a glorious gig as Director of Teaching and Learning Support for several years. When my former boss was selected to serve as Alaska's Commissioner of Education in June 2016, I was asked to fill in as Interim Superintendent. Taking the job for a test-drive led me to believe that I had something to offer as the Lead Learner in the CRSD, and in January 2017, I applied for the position and was hired to serve as Superintendent of the Copper River School District. It is a job I never expected to hold, yet one I couldn't be more excited to embrace as the CRSD pursues its goals as an innovative Alaskan district focused on expanding opportunities for all students.

Originally from southwest Minnesota, my family and I moved to Alaska two decades ago and lived briefly in the Mat-Su before heading out to the Copper Basin where we started a small farming operation. That "small" farm has grown into the largest production hog farm in the state. Growing up as a Midwest farm kid, I swore I would never marry a farmer. Not only did I marry one, but after moving 3,500 miles from our family farm roots, my husband Terry found a way to get back into agriculture in a very unlikely location!  We have enjoyed raising our three children here, and we're thrilled that they love Alaska and consider it their home. Our oldest son, Christopher, and his wife and their three darling children currently live in the Copper River Basin where Chris works as a tech guru for the CRSD. Second in line is Alexander, a high school English teacher in Haines, AK. (Did I mention that Alex is also a published writer? Uh-huh. He is.) Our daughter Emmie is a 2017 graduate of UAF with degrees in Rural Development and Political Science, and she is currently back in Fairbanks pursuing a Master's Degree.. We're pretty proud of our kids!

I am especially excited to be continue my graduate studies through the UA system in Ed Tech and Ed Leadership, as the topics are extraordinarily relevant to my school district, my professional role, and to education, in general. In addition, I am plugging away at a Doctoral program with a specialization in Personalized and Competency-Based Learning. The role of technology in schools everywhere is expanding so very rapidly, and I am constantly pursuing opportunities to learn more about designing instruction and supporting learning for both students and adults that capitalizes on the power of technology as a tool to leverage and expand opportunities.

A quick disclaimer: While some of my posts my reference my local school district, it serves only as a point of reference and provides context for my writing. Opinions and reflections are entirely my own and do not reflect the views of the CRSD.
"To teach is to learn twice over." --Joseph Joubert